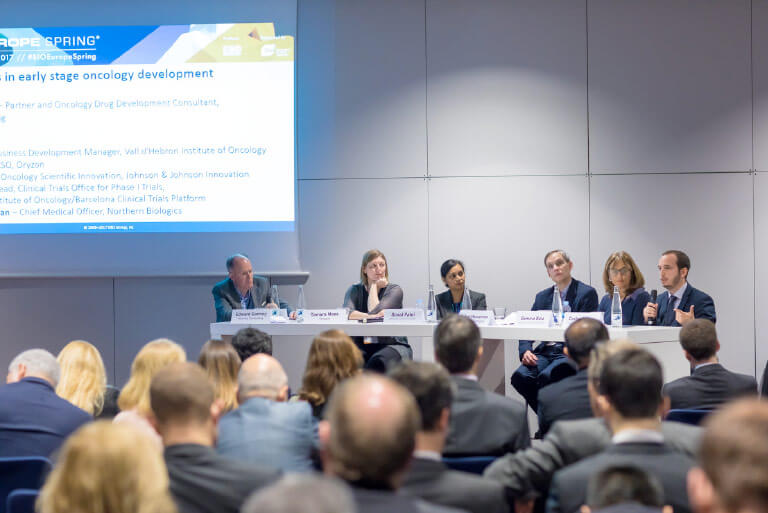 Recently, I was fortunate enough to moderate a provocative panel on clinical trials in early stage oncology development at the BIO-Europe Spring meeting in Barcelona (19-22 March, 2017)

Key takeaways from this meeting included:

Colleagues joining me on this panel included:

I began our 90 minutes together by recounting a few of the grim statistics relating to oncology drug development over the past decade:

Based on these numbers, it is no surprise that oncology drugs now routinely arrive on the market with price tags exceeding $10,000/month. And considered collectively, these numbers speak to an unsustainable track record of converting biologic hypotheses into practical and meaningful clinical interventions. Moreover, it’s the view of myself and others that low rates of successful outcomes in late-stage clinical trials (and subsequently the rate of regulatory approvals) can largely be understood in the context of inter and intra-tumoral heterogeneity of cancer mutations and drug target expression. In other words, many drugs are failing in late-stage clinical trials not because they are inactive but rather because their activity in a subset of patients evaluated is diluted by inactivity in other patient subsets. Those of us who share this view would further argue that future increases in the rate of market penetration among all cancer drugs entering the clinic will be predicated on improving the efficiency and predictability of small, early-stage clinical trials gating a drug’s entry into larger, more expensive, and time-consuming randomized clinical trials. Specifically, it is essential that drugs enter into the clinic accompanied by better tools for identifying those settings and patient populations in which clinical benefit is anticipated.

It was with these issues and objectives in mind that I asked questions of our distinguished panelists. I began by asking Tamara Maes about the experience of founding a small cancer therapeutics company and how the reality of oncology clinical development compares to the expectations she and Carlos Buesa had back in 2000 when they founded Oryzon. Specifically, I asked her if she could share with company founders and early-stage investors in the audience lessons about what they could expect and how they should prepare themselves. 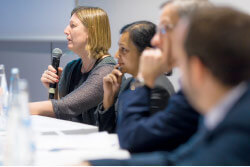 Tamara told the audience to, first and foremost, focus their efforts on meaningful differentiation and doing something new. Citing the example of the company’s lead asset targeting Lysine specific demethylase 1 (LSD1, also known as KDM1A), with applications to both cancer and neurodegenerative disease, she further emphasized the need to be creating in the initial funding of research that is oriented around novel and not well known targets. In the case of Oryzon, it was only after establishing collaborations with NGOs like EUROSTARS and the Alzheimer’s Drug Discovery Foundation that the company inked its first pharma LSD1 pharma deal with Roche in 2014.

Next, I asked Sonal Patel to share with us the perspectives of somebody representing a large multi-national company – one that, in order to remain relevant in a rapidly world, needs to invest its resources in dynamic and innovative science. I asked her to address the potential benefits of collaborations between large pharma and small-to-medium size biopharma companies and how she felt these collaborations could be harnessed to overcome the challenges of oncology diagnostics and therapeutics development.

Sonal also emphasized her company’s emphasis on seeking out differentiation and the desire of J&J Innovation to leverage true expertise in a field of interest. Accordingly, she explained that they paid great attention to the backgrounds of a small company’s management team and advisors. Additionally, Sonal emphasized the importance of establishing relationships as early as possible. These relationships, she explained, might not produce deals immediately but could be expected to blossom over time. In other words, it was with companies and teams with whom they had established strong relationships over time where deals would be more likely to occur. She cited the example of Genmab and their human IgG1k monoclonal antibody to CD38, daratumumab, and highlighted the two-way interface that existed between the companies before deal terms were ever struck. She further emphasized that this collaborative approach extended into, and consequently improved, the post-deal development of daratumumab.

Next, I asked Robert Wasserman to draw on his holistic set of industry experiences working in large pharma, contract research organizations (CROs), and, most recently, small biotech. I asked him to comment on the advantages and disadvantages of working in partnership with a CRO on clinical trials, when CRO participation is necessary and when it is not, and what strategies for success should inform the selection of a CRO.

Bob explained that it really comes down to the size and expertise of the drug development team. Where full-time in-house expertise on advanced clinical trial design and implementation was not in place, it would be essential to fill these gaps. Where the gaps have persisted and companies have tried to manage these trials on their own, disastrous outcomes have been inevitable. Regarding selection of CROs, he recommended that companies try to look beyond the size and name recognition of the providers and focus instead on finding a company-company fit. This would begin, he argued, with the creation of a detailed scope of work that goes beyond a “boiler-plate” document and truly digs into the details and identifies gaps in the company’s skill sets that need to be filled. It would, he concluded, be through this type of hybrid and collaborative framework that successful trials are built and run.

Finally, I asked Gemma Sala and Carlos López to share with us their perspectives from the frontlines of a world class cancer center. Vall d’Hebron remains one of the international leaders in innovative and impacting oncology clinical trials. I asked Carlos, who works on the business side, to share his perspectives on establishing strong and efficient working relationships between industry sponsors and academic medical centers. And I asked Gemma to share with us lessons learned – both positive and negative – for completing oncology clinical trials that are not only on-time and satisfactory for the client but which also serve well the needs of the hospital and its patients, as well as perhaps impacting on the investigative space and international standards of care.

Gemma and Carlos spoke about their experiences at a center that has conducted over 450 phase 1 clinical trials as well as the increasing emphasis on biomarker integration into early stage clinical trials. They noted in this regard that such integration was essential to the center remaining competitive in an ever increasingly global marketplace. On the hand, both noted the need for the center to remain sensitive to the needs and quality of life of their cancer patients and suggested that the optimal trials were those that could balance Sponsor, scientific/academic, and patient needs. Both also spoke to the importance of building flexibility into clinical trial designs so that these trials could reorient themselves in real time to better focus on signals of activity. They cited the example of an eight-arm “octopus” design evaluating multiple regimens and combinations in dose escalation; this ongoing trial has the capacity to eliminate more toxic or less efficacious arms in favor of other more successful arm or arms which would be brought seamlessly into subsequent layers of investigation.

Facing a complex life science challenge? We can help.