The Paris NASH meeting was held July 11 and 12, 2019, subtitled as an “International Think Tank” and it certainly did not disappoint. The meeting Chairs, Dr. Lawrence Serfaty (France) and Dr. Arun Sanyal (USA), along with a superb organizing committee assembled the brightest and best from academia and industry to discuss approaches to this challenging disorder. It turned out to be a superb meeting with beautiful weather, excellent facilities at the historic Institut Pasteur, and outstanding food with the most famous fatty liver, foie gras, readily available in nearby bistros.

While impossible to comprehensively summarize a meeting so rich in valuable information, and at the risk of offending those whose information is not included, I relate some of my thoughts coming out of the meeting. These are my personal perspectives and, therefore, I will not attribute any of my analyses to specific individuals. There were excellent sessions on public health and policy including the critical issue that cardiovascular mortality as the number one killer of NASH patients, modifiable drivers of disease progression, novel genetic markers including new data on the mechanism of action of PNPLA3 mutations, the important involvement of adipocytes in pathogenesis, technological advances and diagnostics, and approaches to precision medicine.

I am going to limit my comments to areas that seemed especially important for the field at the current time: 1) the regulatory climate at FDA and EMA; 2) NASH pathophysiology; 3) the pharmacology of several major drug classes in development, and 4) perspectives on combination therapy.

The current status of regulatory endpoints for drug approval was discussed. Starting in late 2018 there have been three regulatory guidance documents released, including 2 by the FDA, one on pre-cirrhotic NASH in December 2018 and one on NASH cirrhosis in June 2019, and one by EMA in November 2018 that covers both non-cirrhotic and cirrhotic NASH.  The interpretation of these documents by the field has not changed since my published analyses about them, “Agencies Clarify NASH Endpoints—But Don’t Harmonize” and “No Acceptable Surrogates for NASH Cirrhosis”.  In non-cirrhotic NASH the FDA will accept as surrogate endpoints either resolution of NASH with no change in fibrosis or at least a one stage improvement in fibrosis with no worsening of NASH activity.  However, the EMA says they want to see both of these in a co-primary endpoint for conditional approval after 2 years of treatment because of the uncertainty of liver biopsy interpretation.  In NASH cirrhosis, the FDA has indicated there are no acceptable surrogate endpoints and will require a composite score of clinical outcomes for approval.   HAll three of these draft guidance documents are still open for comments from industry and other interested parties, with the period for comment scheduled to close in August.

Multiple presentations addressed the advancing understanding of NASH pathophysiology.  Although unresolved questions remain, two principals have emerged from multiple vectors of research.  First, fat metabolism is of central importance. Perturbation of metabolic processes as a result of obesity and metabolic syndrome leads to accumulation of cellular fat or triglycerides (TG) and the breakdown of those TG into free fatty acids (FFA) which are the proximate precursors of lipotoxic molecules that cause cellular damage. Fatty acids (FFA), not fat (TG) are the bad actors. Why only some individuals with TG accumulation in the liver develop NASH is not well understood.  However, it is clear that addressing the underlying lipotoxic liver environment in NASH, whether by lifestyle changes and/or pharmacologic therapy, appears to be of prime importance for NASH therapy.

The second principal is that lipotoxic fatty acids lead to cellular damage, inflammation, and fibrogenesis and the degree of the resultant liver fibrosis is most directly correlated to eventual morbidity and mortality in patients with NASH. Once again, reasons why some individuals have more robust cellular damage, inflammation, and fibrogenesis than others are not clear, but are likely related to genetic heterogeneity, the composition of the microbiome, and dietary and other environmental factors.

While many interesting mechanisms of action were discussed at the meeting, three major classes of drugs stood out as potentially foundational therapies including the farnesoid X receptor (FXR) agonists, the peroxisome proliferator activator receptor (PPAR) agonists, and drugs that are also used for type 2 diabetes.

The bile acid obeticholic acid (OBC), an FXR agonist already approved for use in primary biliary cholangitis (PBC), is the first drug to have a positive therapeutic effect on NASH related fibrosis in a phase 3 clinical trial (REGENERATE).  As a result, OBC will likely be the first drug submitted for approved for use in NASH.  However, there is great room for improvement for NASH therapy since the efficacy of OCA was seen in a relatively small percentage of patients and the clinical success of OCA is accompanied by important liabilities such as pruritis, HDLc reductions, HDLc increases, and potentially drug-induced toxicity in more advanced patients. Importantly, what should not be lost in the debate of whether OCA will be approved and how useful a therapy will ultimately prove to be is that FXR agonism appears to be a validated approach to NASH treatment with positive effects on steatosis, inflammation and fibrosis. This is a significant and needed advancement of the field.

Ever since bile acids were found to activate the FXR nuclear hormone receptor, there have been efforts to identify FXR agonists that are not based on backbone structure of bile acids. The hope is that FXR agonism by different chemical structures can tune up the beneficial effects and tune down the adverse effects seen with OCA.  As a result, there are 11 FXR agonists in clinical trials for NASH, and this mechanism of action is being viewed as a foundation for combination therapy (see below). While potency of FXR agonism has clearly been increased with these compounds, the jury is out as to whether adverse effects such as pruritus will be ameliorated, although there are encouraging early clinical data.

PPAR agonists are nuclear hormone receptors that act as dimers with other proteins and have pleotropic effects on cellular function. The PPAR α/δ agonist elafibranor is being evaluated in for NASH therapy in a phase 3 clinical trial that reads out at the end of this year (RESOLVE-IT). The results of this trial will represent another landmark in NASH therapeutics and, if positive, will establish PPAR agonism as a second potential foundational therapy for NASH. These agents also have the potential for improving other concomitant cardiovascular risks in addition to therapy of NASH. While not discussed extensively at the conference, another nuclear hormone approach with great promise are the thyroid hormone receptor β agonists, represented most prominently by resmetrion which is now in a phase 3 trial following impressive effects in phase 2.

Finally, drugs that are already on the market for therapy of type 2 diabetes have promise as NASH therapies, including the glucagon-like protein-1 (GLP-1) agonists and the SGLT2 inhibitors.  The LEAN trial with the GLP-1 agonist liraglutide in NASH showed improvement in glycemic control, weight loss, as well as histological improvement in NASH. Semaglutide therapy has even greater weight loss and improvement in ALT in NAFLD, with a 52-week trial with histological endpoints underway in NASH.  Other novel therapies are being tested including oral semaglutide and dual action peptides such as GIP/GLP-1ra and GLP-1/FGF21 agonists.  Because of their promotion of weight loss and the underlying metabolic syndrome these approaches have promise.

There are many other drugs with promising mechanisms of action in NASH including other metabolic agents, anti-inflammatory drugs, and drugs that inhibit fibrogenesis. Of the hundreds of drugs in various stages of development, it is not possible to review them all, but there continues to be room for effective agents that target the main areas of pathology in NASH.

A consensus has developed that combination therapy will be required for treatment of NASH because of the heterogeneity of patient populations and the small percentage of patients that seem to be responsive to monotherapy. When companies consider combination therapy, they are not referring to the sequential or simultaneous addition of one drug to another but instead they seek a pathway to a fixed dose combination that can administered by the same route, preferably oral, although one might envision a fixed dose subcutaneous injection of two or more drugs.

A topic of discussion was how agents should be chosen to investigate as combinations.One approach is to include a “foundational” class of drug such as an FXR or PARR agonist and add a drug with an orthogonal mechanism of action. A controversial issue is whether animal models help guide the choice of combinations. Gilead presented data on monotherapies and combinations in animal models of NASH suggesting that combinations boost efficacy which they have used for guiding clinical development. It is my view that potential partners will want to see combination data in animal models.

Others pointed out that choosing combinations should be based on safety profiles as well as the effect on other clinical parameters such as cardiovascular risk factors. Finally, there was a sentiment that combinations may best be evaluated empirically in human studies because pre-clinical animal models are not reliable for evaluation.  As I see it, none of these approaches are mutually exclusive, so each of these perspectives should be accounted for in considering combinations. When asking what the best combination is, one senior pharma executive said, “the one that works!”.  We are firmly in the era of educated empiricism when approaching a complex disease with an incompletely understood pathophysiology. 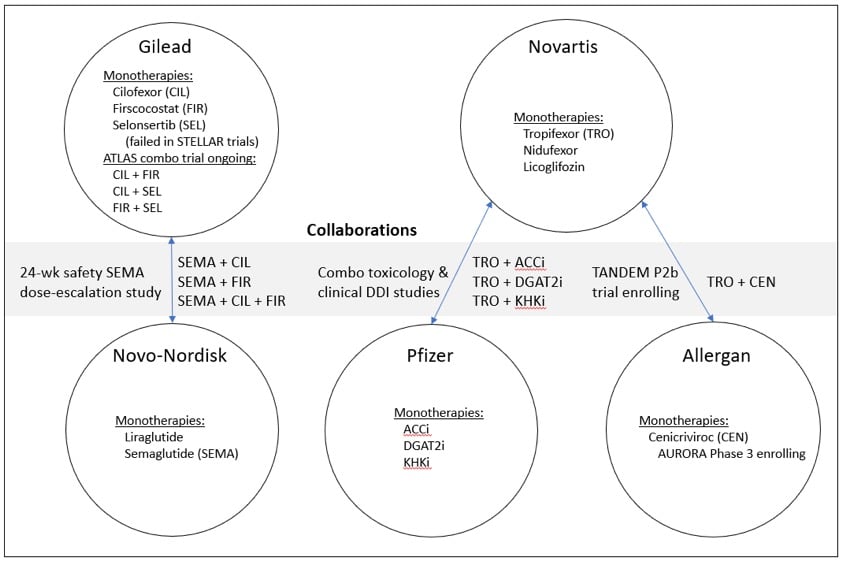 The figure contains only most prominent ongoing combinations, and for this discussion I have not tried to be inclusive of all the companies that ongoing or planned combination trials. For example, both Intercept and Genfit have reported plans for combinations of their drugs OCA and elafibranor, respectively. Additionally, many companies have other in-house, licensed and partnered drugs in earlier development that are candidates for combinations. As one example, Gilead has a pipeline of metabolic targets (Yuhan), antifibrotic targets (Morphic Rock), and multiple possible targets through their new partnership with Galapagos. In another example, Novartis has multiple other metabolic and anti-inflammatory assets in early development, such as the recent acquisition of IFM Tre Therapeutics and its NLRP3 inhibitor.

The Paris NASH conference was a stimulating experience. Many thanks to the organizers and speakers for their efforts. This summary by no means defines the entire space since there are hundreds of exciting drugs and programs at other large pharma and biotech companies. It is my hope that this summary of my observations from the conference will help those of you who could not attend capture some my enthusiasm for the progress in NASH therapeutics.

Disclaimer: The views expressed in this article are solely those of the author and do not represent the views of the conference organizers, speakers, or attending companies.

Facing a complex life science challenge? We can help.

Contact us today to learn how our consulting expertise can serve your project.